Why do we lie – what’s the psychology behind it?

We all know that lying isn’t the best thing to do. It’s a universally acknowledged truth. So why do we do it in the first place? We spoke to our head psychotherapist, Natalija and these are the meaningful truths she shared with us…

Why do we lie?

Lying allows a person to establish perceived control over a situation by manipulating it. It’s a defence mechanism that (seemingly) prevents them from being vulnerable, that is, to not open up and reveal their true self to another person. To do so comes with the chance of the other person rejecting, criticising or feeling disappointed with you. And for a deeply insecure person, this can be unbearable. When someone is lying and is rejected there’s a sense of there being a reason for the rejection. By comparison, when a person opens up and is rejected, this feels to them as though they’re fundamentally disliked, which negatively affects their self-esteem.

Sometimes people reenact early dynamics by acting in a certain way. Lying and making others check on, or distrust them, might be an unconscious behaviour that gets repeated as a result of past experiences. In other words, the person hasn’t learnt how to relate to people differently. For example, they may have faced difficulties in their upbringing such as violent parents so they had to create a world of their own (often lying to themselves or developing a habit of lying to others).

In a sense as an extension of the defence mechanism mentioned earlier. People will also occasionally lie to avoid difficult situations and ‘bury’ the feelings that come with them such as guilt, depression, sadness and anxiety. A weaker ego (low self-confidence) makes it more difficult to bear these feelings. Lying enables people to avoid situations in which they would have to confront these overwhelming feelings, in the short-term. It’s important to note that suppressing our thoughts and feelings into our subconscious is not a solution and they will affect you affect you in the long term – this is unavoidable and is the basis of psychoanalytic therapy.

Fear of hurting or letting a person down is another common reason why people lie. Some people find it extremely difficult to bear the feelings that come with disappointing another person. We can say that this is a selfish reason because it centres around protecting oneself from taking responsibility for the disappointment. The victim usually wants to know the truth whatever it is.

When does lying become unhealthy?

In terms of lying becoming unhealthy, when the other person senses that you’re lying or have been repeatedly lying – no matter how significant the lie or the reasoning behind it – this affects their ability to trust you. Similarly, if they see through your lies, in terms of insecurity or a lack of confidence, this may affect their overall judgement of and respect for you. Generally speaking, people are more accepting of others’ imperfections when that person is open and transparent about them. In other words, they own their imperfections. Often this is in fact very endearing to us as humans. It’s also liberating and can be a release for us as individuals when we come clean about our weaknesses and mistakes.

When is lying acceptable, when is it not?

Of course lying to plan a surprise for someone is acknowledged as acceptable. Perhaps lying might also be acceptable when it means saving someone’s life. But this is more to do with morals and ethics than psychotherapy. For mental wellbeing, it’s best to strive not to tell lies. In a relationship being honest means really getting to know each other and obtaining honest feedback, which helps to improve ourselves and our relationships. Often when we are honest, the other person can help us to overcome our insecurities, as well as coming to understand us better. If we hide things from them they cannot do this.

Perhaps it’s also important to talk about how we can handle the truth better? Work wise, being honest helps to highlight organisational problems, learn and avoid mistakes. We can do this in trusting relationships with friends, family and colleagues.

Are white lies good or bad?

It’s not ok to tell lies even if they’re “little” or “white” lies. It’s still a lie and misleads a person. Lying – however big or small – creates a gap between you and the other person: you aren’t showing what you really think or what you really did. In this way, you’re missing out on an opportunity to get to know each other on a deeper, more intimate level. 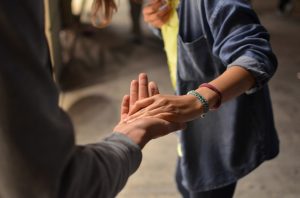 What personality type commonly falls victim to being lied to?

Liars do not target anyone in particular, it’s simply the way they relate to people. (Narcissists and psychopaths, on the other hand, do target people who can be useful to them.) That said, if people are consistently lied to, it may suggest that either, they’re not very in touch with themselves or really want to believe the lie instead of facing the truth. That’s why they don’t (or can’t) pick up on clues or signals that a liar always subconsciously shows. In my experience, it nearly always takes two people, one is lying and another allowing themselves to be lied to.

When might you be dealing with a personality disorder or other mental illness?

Lying doesn’t necessarily mean that they have a personality disorder. Nearly all people lie now and then, but when a person is lying on a regular basis, (unnecessarily or in order to further their own interests at someone else’s expense) the question may be raised about their psychological state. Being a compulsive liar can indicate issues concerning an individual’s self esteem, their understanding of what distinguishes right from wrong, or a lack of a strong sense of self.

What are the benefits of family counselling?

Counselling can help to resolve a range of relationship issues within a family. Every family has a...

What is bulimia nervosa?

Bulimia nervosa is an eating disorder where a person develops an obsessive attitude with food and their...

Do our recurring dreams contain any meaning?

Dreams are fascinating when you really investigate them. Why and how do we experience this stream of...

Sticking to your New Year’s resolutions can be a challenging prospect. You may find that you are...

Not ill? A Therapist Can Still Help You

There is a common misconception that the only people who need therapy are those who have already...

Tips coping with anxiety and depression during Christmas

Whether you are celebrating Chanukah, Christmas, or just taking a holiday, this time of year is often...

What does ikigai mean and how can I find it?

Ikigai is a Japanese concept that has gained worldwide attention of late. It originates in the Pacific...

Restless or something more? The signs of insomnia and treatment

We all have the the occasional restless night, and sometimes this can carry on for more than...

How Stress Presents in Physical Symptoms

Stress is endemic in society, with 75% of people saying that they ‘felt so stressed they could not cope’...

How to deal with someone having a panic attack

What’s the difference between counselling and psychotherapy?

Sometimes people take the terms counselling and psychotherapy to mean the same thing. This is perfectly understandable...

Cognitive Behavioural Therapy for depression: Does it work?

CBT, or cognitive behavioural therapy, is a well-established talking therapy used to help treat a number of...

There are many personality disorders recognised by psychologists today. It’s also known that these often co-occur, with...

Can an accident change someone’s behaviour?

In 1848 a young Phineas Gage was working on the railways. His job involved tamping down dynamite...

How to qualify as a psychotherapist

Much like the nature of the work you’ll be doing as a psychotherapist, there isn’t a single...

Why feeling lost is okay

The stigma around mental health has hugely reduced recently and more and more people are encouraged to...

Can I say ‘mental problems’? A mental health language guide

Mental health can be a difficult issue to approach, especially when it involves someone close to you....

It’s easy to assume that psychology, psychiatry and psychotherapy are part of one large group, a series...

Directly translated from its ancient origins, the word psychoanalysis literally means ‘to unloosen the mind’, a definition...

Tackling the roots of Depression

Saying “I’m depressed” is easy. We do it all the time: when life has thrown up some...

How modern therapy can help to overcome learned behaviours and improve your life People can have many...

Like so many things in life, it is important to strike a healthy balance when considering your...

From an early age we are taught that selfishness is bad: As children we are rightly encouraged...

Leaving the nest: Supporting a child at university

As the last of the A-level results envelopes are picked from the floor, parents, guardians and students...

For many people negative self-talk is an established fact of life: thoughts like “I’m stupid”, “Nobody cares...

The Dangers of Negative Self-Talk

The Dangers Of Negative Self-talk with Psychotherapy Imagine that you had a friend who did nothing but...

What Type Of Psychotherapy Do I Choose?

What Type Of Psychotherapy Do I Choose? Simple answer to a difficult question at Psytherapy “What Type...